Eugène-Antoine Durenne was a French post-impressionist painter who exhibited during his lifetime at the Paris gallery of Paul Durand-Ruel1, the eminent art dealer who was instrumental in establishing French impressionist art.

In 1952, as a result of a posthumous exhibition at Galerie Durand-Ruel, Le Parisien Libéré2 considered that Durenne was not unworthy to follow in the footsteps of Bonnard, Vuillard and Albert André3. This website is designed to reflect the sentiments of the Parisien Libéré and to further promote the work of master post-impressionist Eugène-Antoine Durenne.

Below: Portrait of Eugène Durenne by Albert André 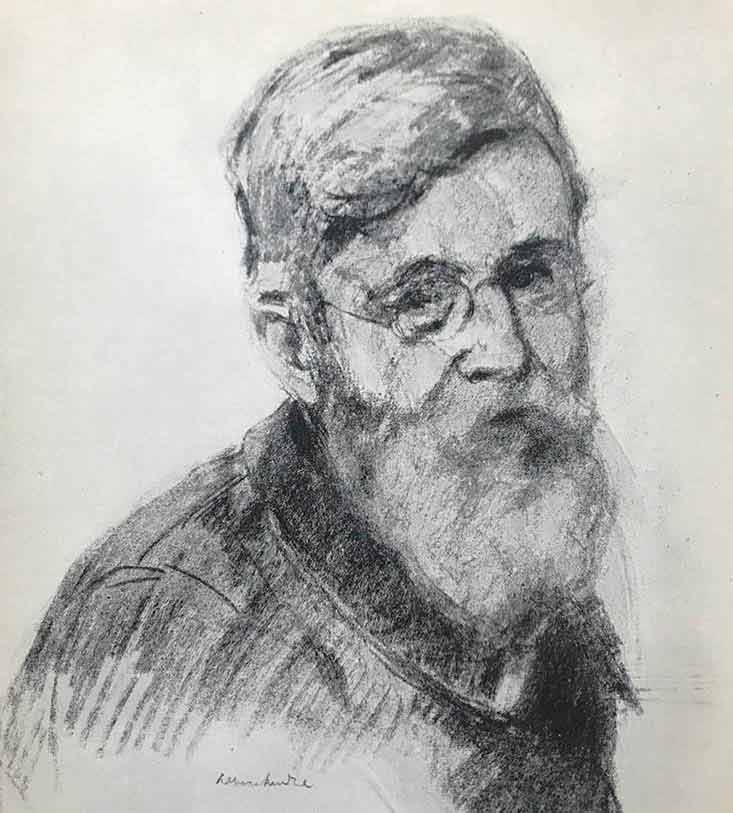 Durenne was born on the 11th December 1860 and lived the first twenty years of his life in Melun, a southeastern suburb of Paris about 40km from the centre of the capital. After studying at the Lycée Condorcet, Durenne attended the College de Melun. As a result of a brother being lost at sea during a shipwreck, Durenne gave up an ambition to become a sailor so as not to cause further distress for his parents.

Having gained a law degree at the Université de Paris, he became an assistant parliamentary stenographer at Mairie du XVème (town hall of Paris 15th arrondissement), moving on to a position as document reviser and working for his uncle Monsieur de Haynin for two years at a coal company, which supplied heating and lighting to Paris.

In 1882 Durenne had expressed his penchant for the arts in a letter to his parents – also conveying a dislike for business. This was likely a seminal point in his life.

After studying literature, Durenne attended the Académie Julian from 1887 to 1888, where he met Édouard Vuillard and Pierre Bonnard. The influence of the two master artists is evident in Durenne's painting style. Two further years were spent at the Académie Colarossi in Paris, under professors Rixens et Courtois. Here, importantly, Durenne became friends with artists Albert André, Camille Pissarro, Louis Valtat and Georges d'Espagnat.

In 1892 Durenne married Léonie Juilien and in 1894 their only child was born in Clamart, Paris – a daughter named Mathilde. Durenne painted Mathilde many times, with later works including his grandchild. That same year Durenne exhibited at the 8th exhibition of Impressionists and Symbolists at the Galerie Le Barc de Bouteville. 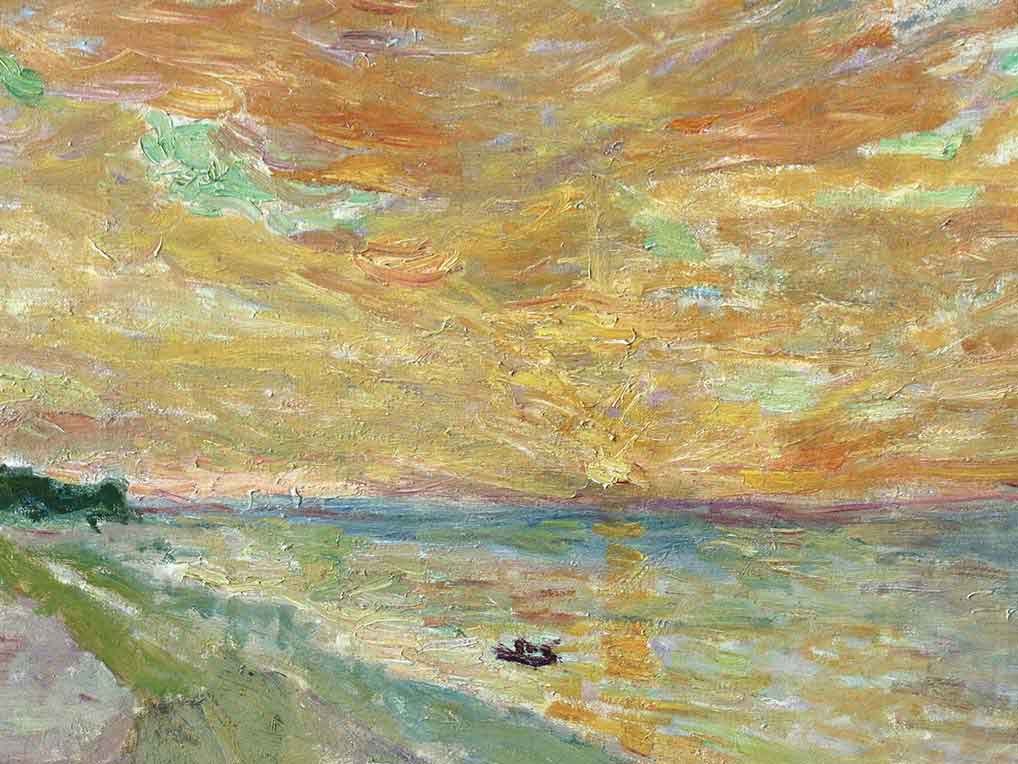 Durenne also worked in the atelier of George-Daniel de Monfreid, a French artist and collector who was friends with Paul Gauguin. Here, Durenne was introduced to Paul Durand-Ruel by the then elderly Camille Pissaro4. 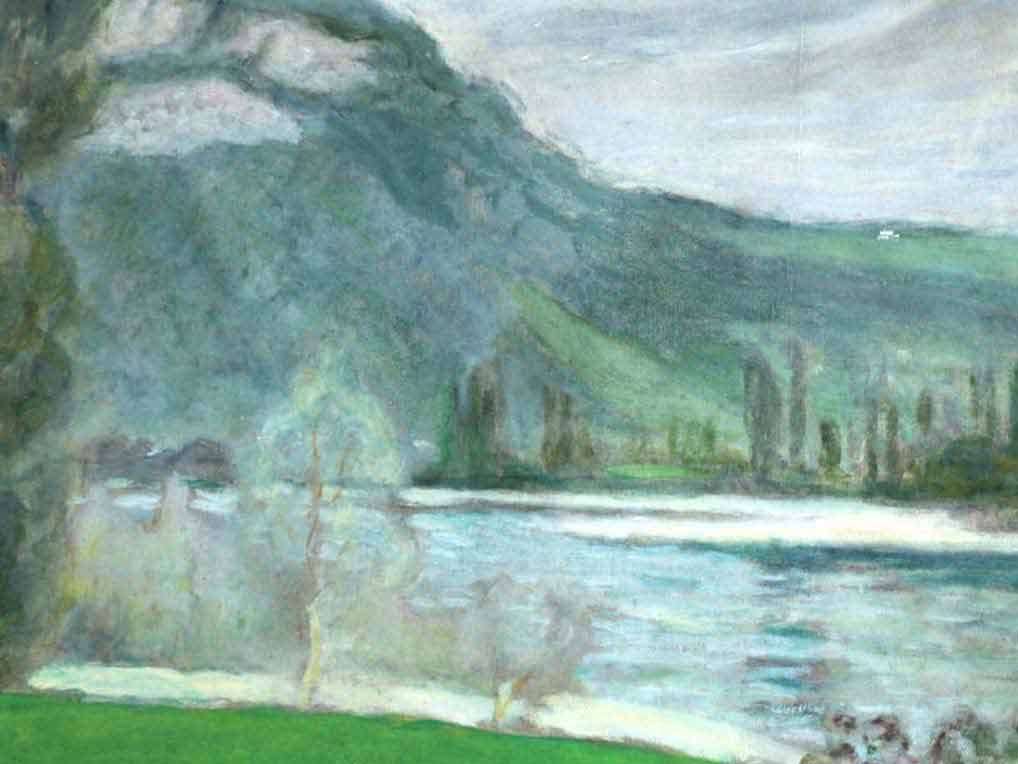 At some point Durenne relocated, living in Toulouse, in south-west France, until 1917. Whilst there a number of his works were acquired by Henri Rachou (curator of the Muséum de Toulouse) and Arthur Huc (director of La Dépêche).

In 1918 Durenne moved to Endoûme, near Marseille, asking his painter-friend, Albert André (also living in Endoûme), to find him a suitable residence.

Durenne travelled the Mediterranean extensively, producing works in locations such as Rome, Venice, Martigues and Cagnes – an example being the background image at the head of this page, 'Cagnes, Le Soir', painted in 1926.

The 1930s were cruel to Durenne. In 1933 he became paralyzed in Nice as a result of a serious accident and in 1936 his mother, sister and wife died.

Durenne refuged in Dourgne (a commune in the Tarn, southwest France) from 1939 until his death on January 26th 1944. A Gregorian burial mass was held by Dom Robert, prior of the Abbey of Encalcat. 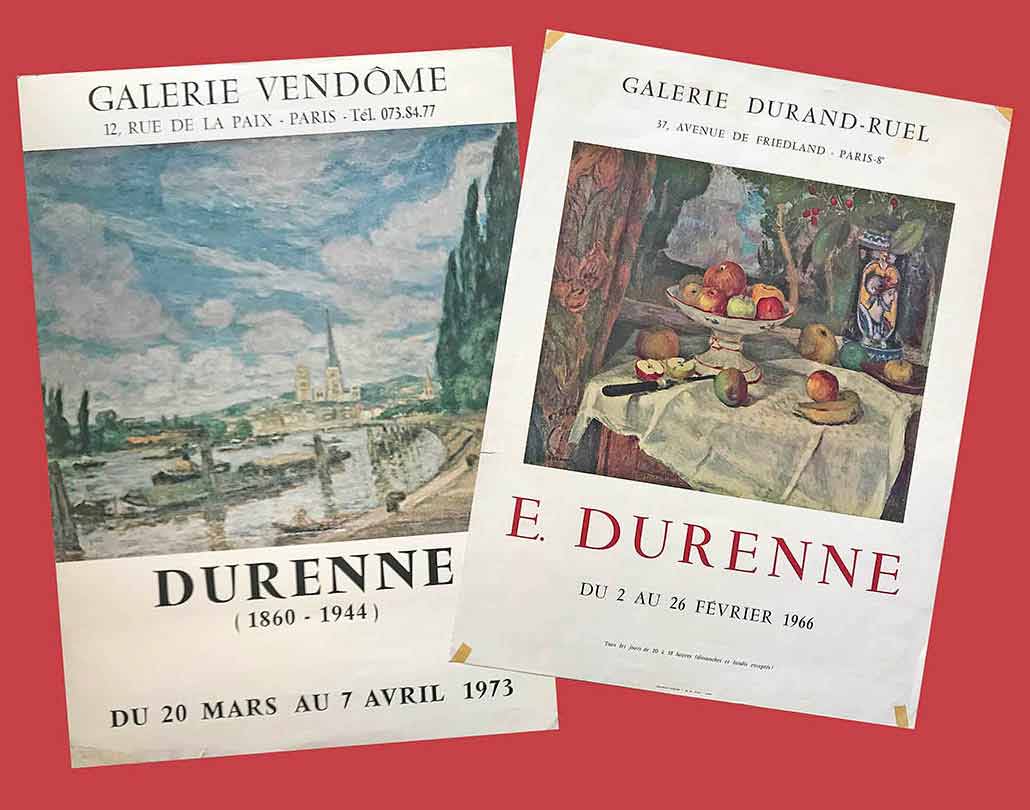 As well as exhibiting with Durand-Ruel, Durenne exhibitied many times during his lifetime, in both France and abroad. After the 8th exhibition of the Impressionists and Symbolists, Durenne exhibitied his first self-portrait in 1898, followed by a New York exhibition by Durand-Ruel in 1900. Other exhibitions included the Manchester City Art Gallery in 1907 and the Grafton Galleries, London in 1921.

Works by Durenne were exhibited posthumously on many occasions including Galerie Durand-Ruel, Paris in 1966 and Galerie Gérard Rambaud, Vincennes, Paris in 1990.

Durand-Ruel photographed and catalogued Durenne's paintings for their archives. His daughter continued to build this inventory along with the assistance of Lucy Krohg (Paris art gallery owner) for watercolors, drawings, gouaches, and oils on paper – allocating a catalogue number to the reverse of the works.

Many of Durenne's paintings are held in major galleries across France and Europe including the Musée d’Orsay in Paris, the Petit Palais in Genève and the Musée des Augustins de Toulouse.

Durenne is known for his interior scenes, landscapes and still life compositions. The artist's style of painting possesses qualities seen in some works by Bonnard, Vuillard, Albert André and many of the other post-impressionists, but his paintings maintain a unique quality of their own. A Durenne will almost certainly stand out in a crowd. 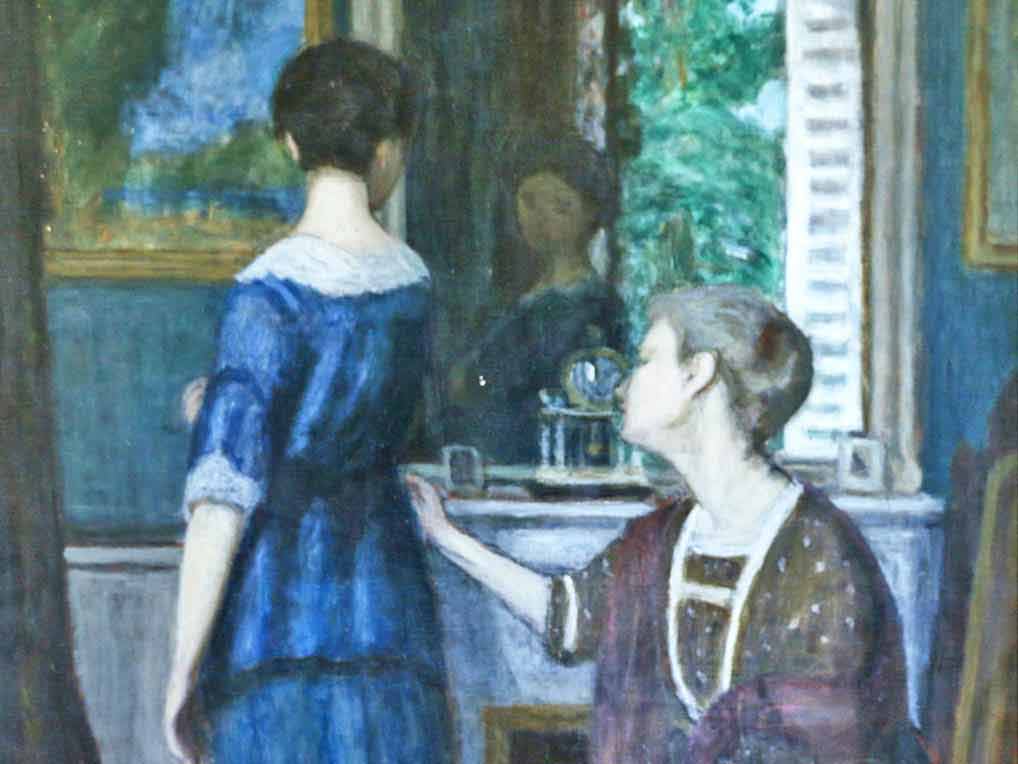 There is an intimacy to Durenne's interior scenes – they capture a natural moment in time and describe a 'mystery of enclosed lives', as described by critique Georges Besson. Whether a loose sketch or more precise studio work, one is drawn into the evocative silence of the scene.

Interior scenes eveoke the viewer to invent scenarios. Art collector Alan Williams describes an 'edginess' to 'La Cuisinière' for instance. Durenne will often use verticals and horizontals in backgrounds, producing a 'grid' on which the characters play. Doorways and open windows allow the viewer to travel through the scene. 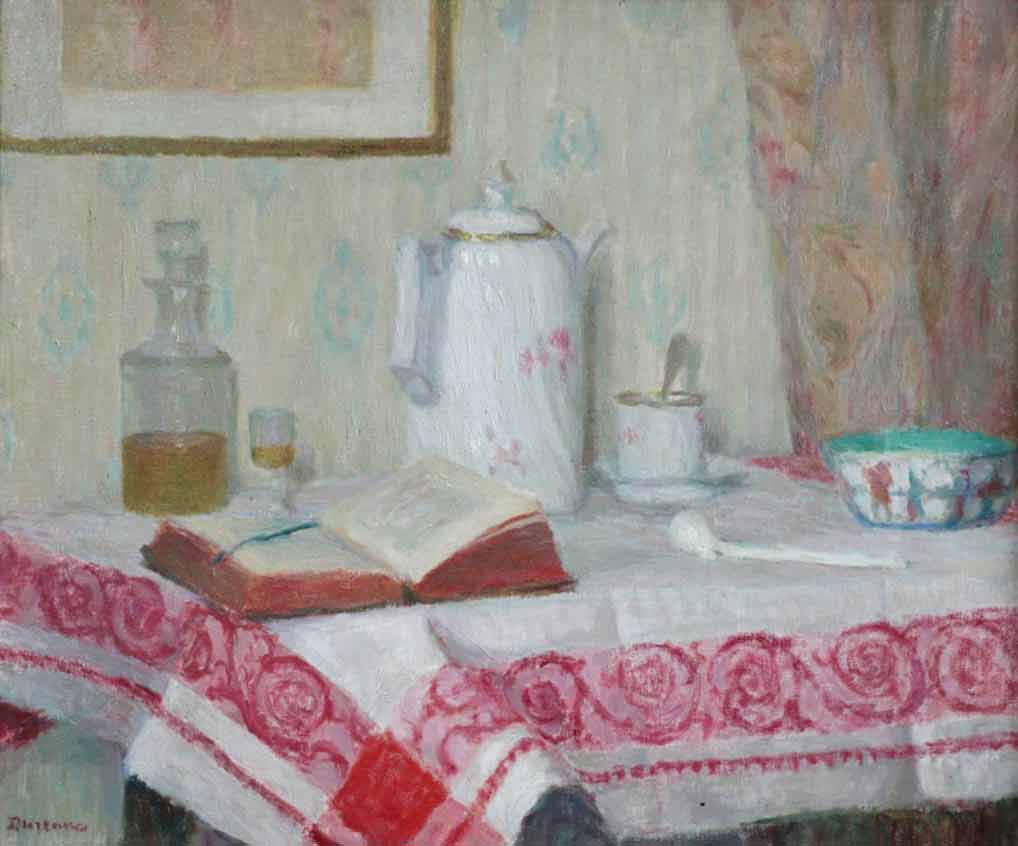 Durenne was a true-to-detail painter of even the most mundane aspects of everyday life. Still lifes of familiar objects – each object in harmony with its neighbour – tells a simple, everyday story and acquaints naturally with the viewer.

Figures and landscapes are depicted true-to-life, with an eye to detail and confidence in technique. There is an inherherent control with each brush stroke. A limited palette offers a sense of restraint. Landscapes echo sponanaity of design, dramatic Durennesque skies bellow and move capturing a mood. Confident brushstrokes define rolling hills, misty mountains give depth.

Durenne writes that talks with Camille Pissaro in the last years of his life, visits to the Louvre and Galerie Durand-Ruel, and the paintings of the master impressionists had opened his eyes.

Let us in turn open our eyes to the wonderful art of Eugène Antoine Durenne5.

1Paul Durand-Ruel was the first art dealer to actively promote artists by awarding stipends and holding solo exhibitions. Durand-Ruel represented such names as Pierre-Auguste Renoir, Edgar Degas, Claude Monet, Édouard Manet, Berthe Morisot, Camille Pissarro and Alfred Sisley. Durand-Ruel exhibited Eugène-Antoine Durenne in France, London and New York.
2Le Parisien Libéré (The Free Parisian) was a newspaper launched in 1944 as a device for the French Resistance during the occupation of France in the Second World War. An endorsement in the publication would have gone some way in influencing the promotion of Durenne's works. The publication is still printed daily under the name of ‘Le Parisien’.

3Albert André was also a French post-impressionist painter who, like Durenne, was represented by art dealer, Paul Durand-Ruel. André’s works were predominantly portraits. The portrait of Eugène Durenne above was drawn by Andr&eacute. He enrolled at the Académie Julian in 1889 – two years after Durenne. The two artists were good friends and would have had many discussions on painting technique.
4Camille Pissaro would have seemed like a father figure to Durenne, in a way that he did to the post-impressionist painters Paul Cézanne, Vincent van Gogh, Georges Seurat and Paul Gauguin.
5There are Eugène-Antoine Durenne paintings for sale in the Vintage Arts shop.